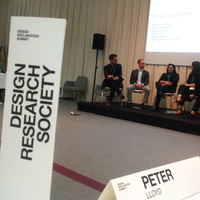 The DRS attended the second Design Declaration Summit in St. Étienne, 2-5 April 2019. International delegates from a diverse range of design related organisations were represented, including the UK Design Council, the national Danish Design Centre, the Commonwealth Association of Planners, Architecture Sans Frontières, as well as a number of Universities and design schools.

This was technically the pre-summit which arranged a series of activities in preparation for the full summit, planned for 2021. These activities centred around three workstreams:

Presentations in each workstream demonstrated the breadth of global activity that relies on, or is affected by, design. At this scale, the synergies with the UN Sustainable Development Goals were noted by a number of presenters. The values in the original Declaration were referred to regularly, albeit with only a few delegates noting just how difficult it is to confront the practical reality of ethics in design.

The range of discussion within each workstream attempted to identify practical progress that could be made prior to the main summit in 2021. This is, as anyone who has hosted such an event will know, the hard part - talking and  agreeing on matters is one thing but translating this to tangible action is quite another. The DRS, with a few other organisations, called for a design prototyping approach to elicit outputs and act as a catalyst to make progress. We await the outputs from the Pre-Summit and will share these with members as soon as they are available.

The Design Declaration Summit website can be found here: http://www.designdeclaration.org/