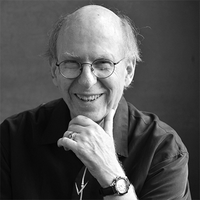 Victor Margolin (1941-2019) was Professor Emeritus of Design History at the University of Illinois, Chicago, a seminal figure in the development of Design History and Design Studies and a proud collector of corny puns and kitsch objects. Born in Washington DC Victor enrolled to study English Literature and Film at Columbia University during which time he edited The Columbia Jester, made contributions to MAD magazine and published two books of puns. He graduated from Columbia in 1963 with a Fulbright Fellowship to study at the Institute of Higher Cinema Studies in Paris. On returning to the US Victor eventually settled in Chicago, in 1975. There, after completing a PhD on Russian constructivist designers, his career started to take shape with the publication of American Poster Renaissance: The Great Age of Poster Design 1890-1900 (1975), the edited volume Propaganda: The Art of Persuasion WWII (1976) and The Promise and the Product: 200 years of American Advertising Posters (1979). He then secured a tenured post teaching art and design history at the University of Illinois in 1982, remaining there until his retirement in 2006.

Early in his career at the University Victor worked with colleagues to establish the academic journal Design Issues (first published in 1984) becoming its founding editor then remaining a committed member of the editorial board thereafter. From this point on Victor started to edit and co-edit important volumes of essays on design titled Design Discourse (1989), The Idea of Design (1995) Discovering Design (1995) and The Designed World: Images, Objects, Environments (2002). Returning to his PhD interests Victor published The Struggle for Utopia: Rodchenko, Lissitzsky, Moholy-Nagy, 1917-1946 (1997) followed by a collection of his own essays titled The Politics of the Artificial: Essays on Design and Design Studies (2002). His lifelong interest in puns and kitsch led to the creation of a private collection of objects he called The Museum of Corn-temporary Art (which is now in the permanent collection of The Wolfsonian, Miami) accompanied by the publication of Culture is Everywhere (2002). Victor’s final major publishing venture was the World History of Design printed in two volumes (2015). He was the recipient of Lifetime Achievement Awards from LearnXDesign (2015) and the Design Research Society (2016).

Victor was a man of immense intellectual generosity and a reasoned advocate of design as a tool to create societies that were more just, equitable and compassionate. These values were accompanied by a keen mind and twinkling eye that drew Victor to people all over the world. His deep humanity, ideas and insights will live on through books and essays to inspire future generations of designers.