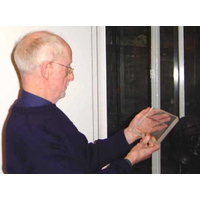 The pioneering, internationally renowned and influential design researcher John Christopher Jones died on the 13thAugust 2022, in London, at the age of 95. He was a founding member of the Design Research Society in 1966, the Vice-Chair of the first Council of the Society, and its Chair 1971-73. In 2004 he was the first recipient of the Society’s Lifetime Achievement Award and an Honorary Fellow.

Known particularly for his early work in design methods, Jones later moved far beyond that, becoming a visionary proponent of ways of seeing and creating human-centred systems and ways of living, suggesting that: “The future job of a designer is to give substance to new ideas while taking away the physical and organizational foundations of old ones. In this situation, it is nonsense to think of designing as the satisfaction of existing requirements. New needs grow and old needs decay . . ." But, more than that, “it's not another way of doing design, it's a way of doing what designers currently don't do at all.”

John Christopher Jones was born in 1927, in Aberystwyth, Wales. After National Service in the Army, at the end of the Second World War, he studied engineering at Cambridge University, and emerged into the brave new world of Britain in the 1950s. He immediately became involved in the field of design, working for the Festival of Britain in London in 1951, which introduced the democratic, pared down but decorative style of 1950s British design. Shortly after, he began working for AEI, the large electrical engineering manufacturer in Manchester, where he was one of the first people involved in applying ergonomics within engineering design. At the same time he was occasionally teaching in industrial design at the Manchester College of Art. Throughout the 1950s he wrote several articles for the Design Council’s Designmagazine, including a pioneering and insightful series on the implications of automation for design. In 1959 he published a seminal article outlining 'A Systematic Design Method' in Design, reporting a project with students to design a set of cutlery. The paper was included as part of his contribution to the DRS 2016 conference:
https://static1.squarespace.com/static/55ca3eafe4b05bb65abd54ff/t/587bd886e3df288ed10858d0/1484511374297/DRS50th_John+Chris+Jones.pdf

He has said that he became involved in systematic design methods only as a way of trying to get ergonomics data included in the engineering design process at the time and place where it belongs – at the beginning. He has also always said that the aim of his growing involvement in studying and redesigning the design process was to be able to include within it both rationality and intuition. In 1962 he was the lead organiser of what became known as the Conference on Design Methods, but which was actually a ‘Conference on Systematic and Intuitive Methods in Engineering, Industrial Design, Architecture and Communications’, with contributions from artists as well as engineers and designers. http://www.publicwriting.net/2.2/dmconference1962.html

The conference led to the foundation of DRS in 1966, and was celebrated at the DRS 50th Anniversary Conference in 2016, which Chris Jones attended as a guest of honour.

In 1965 Jones was invited by the far-sighted Professor Denis Harper to establish what became the Design Research Laboratory, within the Department of Building at the University of Manchester Institute of Science and Technology. There, he engaged in a variety of design research projects and devised and led an MSc course in Design Technology, introducing design students to ergonomics, statistics, research methods, the history of technology, and the then-new subjects of computing, operational research and systems engineering, as well as design methods. At the Design Research Laboratory he pioneered approaches to what became known as user-centred design, and developed several of the design methods and techniques that became used in design consultancies around the world. One of his recurrent themes was that machines should be designed as ‘zero-learning’ devices, meaning that they should be usable in obvious, intuitive ways, or ‘user friendly’.

In 1970 Jones published his book on Design Methods (Wiley: 1970, 1980, 1992); it was a comprehensive manual of research, systematic and creative methods for designing but the opening part of the book also set design within an historical development from craftwork, through industrialisation and ‘design-by-drawing’, into post-industrial beginnings and possibilities. The book’s subtitle, ‘seeds of human futures’, suggested the visionary sense that Jones was developing for design and presaged the moves he was about to make from conventional views and practices of design into something else. Although immensely influential in the establishment of design methods, the book was actually, he once told me, his farewell present to the design methods field, he was quitting it - something which, for a long time after, people never realised.

He turned to redesigning design in a much more radical way – including to the use of chance processes in composing and creating, and in designing life. When he was invited (as he often was, given his reputation in design methods) to give visiting lectures at that time, some of his audiences were clearly astonished at what they were offered; imagine the audience at London’s elite Architectural Association when they were presented with a series of odd snapshots from his family holiday in St Ives, Cornwall, taken from chance-decided locations, or the audience of design methodologists in the USA, presented with randomly-chosen readings from a great variety of sources.

In 1970 Jones was appointed as the first Professor of Design in the brand-new, distance-learning, UK Open University. Chris Jones was an inspiring teacher, but better in leading face-to-face group seminars than in giving remote TV lectures. Always thoughtful and quietly spoken, his incisive off-the-cuff comments and radical insights would often lead a seminar discussion into new directions and unexplored territories. He did introduce some experiments into the OU’s early rather rigid educational media of pre-recorded TV and radio broadcasts and carefully co-authored teaching texts, such as radio phone-in discussions with students, audio cassette recordings (forerunner of today’s podcasts), and loose-leaf files of teaching materials that the students could add to, but he was clearly struggling within the constraints. He had some part-formed visions of what an open university might be, taking advantage of new media technologies and a more radical view of education. But he found the Open University was turning out to be nothing like the future learning facilitator that he could imagine, and so he quit that, too, in 1974.

Ever after, he was an independent researcher, writer and sage. He wrote quite prolifically, often incorporating chance methods of composition, and several new publications appeared in the 1980s. One of them, Essays in Design (Wiley: 1984), was a randomised collection, with section titles chosen at random from poems by Wallace Stevens. It was recently re-issued as designing designing in the Bloomsbury Press series on ‘Radical Thinkers in Design’ (2021).

And then along came what I think he had always had some intuition would appear – the Internet and the world-wide-web. He once told me that whenever he was asked by a new acquaintance “So, what do you do?”, he would reply “I’m a beginner”, meaning that he saw himself as someone who initiated new things and was a forever novitiate. His broad definition of designing in his Design Methods book was ‘to initiate change in man-made things’. When he started a ‘digital diary’ in 1998, he initiated – or was a very early adopter of – what became known as blogging: a personal diary of everyday events, thoughts and reflections, available to anyone who logged on to his ‘softopia’ website [“softopia: an invented word meaning utopian software or a new culture that is softer (and i hope less inhuman) than is the mechanised society we inherit”].

His last-ever blog entry was on 15 June 2022, on ‘the future of caring’, whilst he was in a hospice. It is, as ever, gentle, inspiring, diffident, enigmatic, hopeful, looking to the future.

Do you have experiences, memories or comments on Jones’ work that you would like to share in remembrance? If so, please email editor@designresearchsociety.org to add to our ongoing tributes. 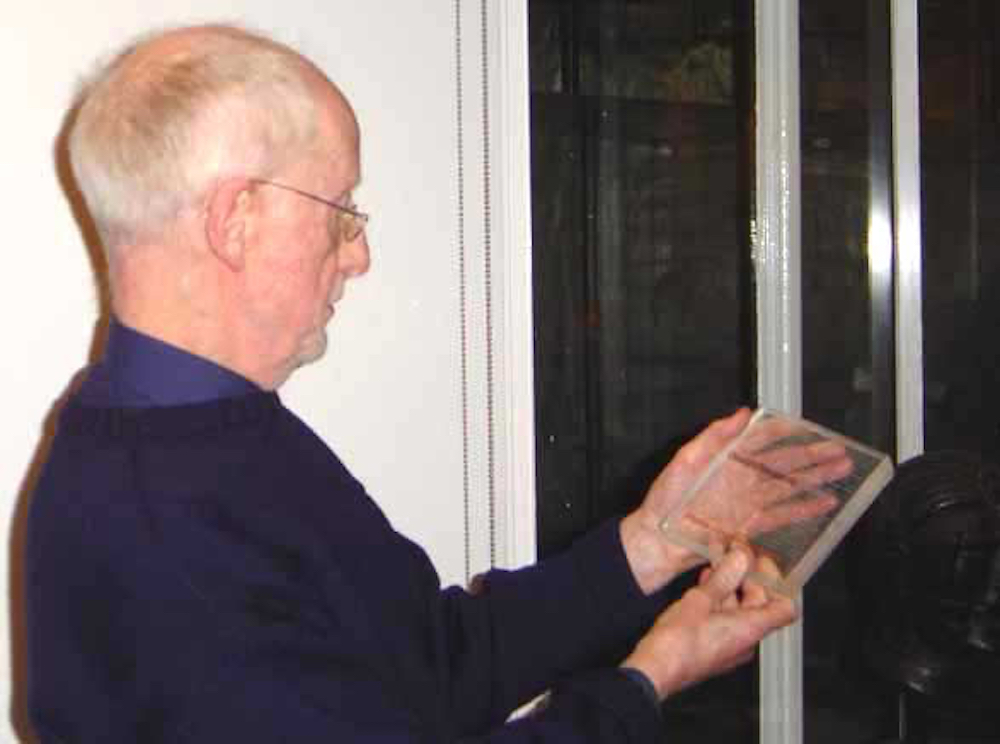 John Chris Jones receiving his Lifetime Achievement Award of the Design Research Society, 2004. He said "I am very struck that this is transparent, although it is very heavy, its poetry is intangible . . .  I value the intangible, along with the real of course . . . thank you very much for this . . . a nicer thing I could not have imagined”.